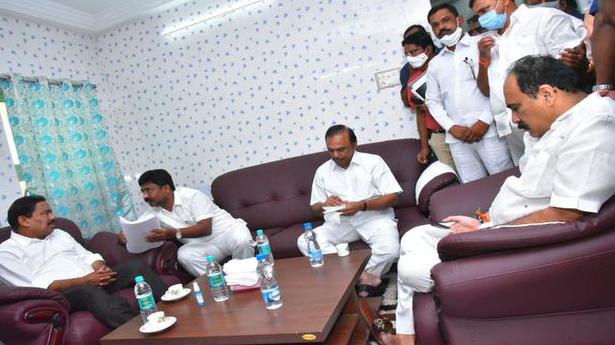 Chairing the DDRC meeting here, State Social Welfare Minister P.Viswarup, also Minister In-charge of Prakasam district, allayed the fears of farmers over the omission of the ongoing project in the gazette at the time of issue of notification by the Centre for administration by the Krishna River Management Board.

Farmers could expect Krishna water for their parched lands next year as the work on the project, designed to provide water to 15 lakh people and irrigate about five lakh acres of land, progressed at a brisk pace, he said.

State Education Minister A.Suresh said it was only due to some typographical errors that the project, which figured in the State Reorganisation Act, had not been included in the Central gazette. The State government was taking all necessary remedial steps in this regard, he said, adding that the work on the rehabilitation colonies had been taken up on a war footing and the same would be completed before the release of water from the Nallamallasagar.

YSR Congress Party MP from Ongole Magunta Srinivasulu Reddy urged the officials to speedily send the Detailed Project Report(DPR) for the Veligonda project to the Centre and asked the DDRC members to follow up the matter with the Centre.

MLC from Graduates constituency Yandapalli Srininvasulu Reddy urged the State government to step up allocation for the project, which had now reached the fag end.

Meanwhile, Energy Minister Balineni Srinvasa Reddy directed the officials to ensure power supply to Jagananna Colonies. He expressed his ire over reports that some erring officials were harassing individuals taking sand for construction of houses at the behest of some private firms.

Chirala MLA Karnam Balarama Krishnamurthy urged the officials to ensure Krishna water from Nagarjunasagar Right Bank canal as large tracts of land in tail-end areas in the district faced water shortage in the district every year.

Prakasam District Collector Pravin Kumar told the members that land for airport was being identified in Martur by the district administration.