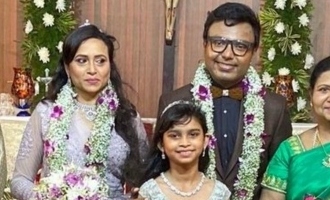 One of Tamil cinema’s leading music composer D. Imman got married for the second time today (May 15th) and photos with his new bride have gone viral. In December 2021 he announced on social media that he and his wife of thirteen years Monica Richards have divorced under mutual consent. The couple have two daughters Blessica Kathy and Veronica Dorothy.

Earlier this year Imman stated in an interview that his father wanted him to get married again and to please him he is taking the next step in his life. He also revealed that he preferred a widow or a divorcee with a girl child who will make a perfect family for him along with his daughters.

It is reported that Imman’s new wife is Amelie the daughter of the late Kollywood art director Ubald. Only close friends and family members were present at the wedding. Sangitha and Krish and veteran actress-producer Kutty Padmini were among the early guests to wish the couple.