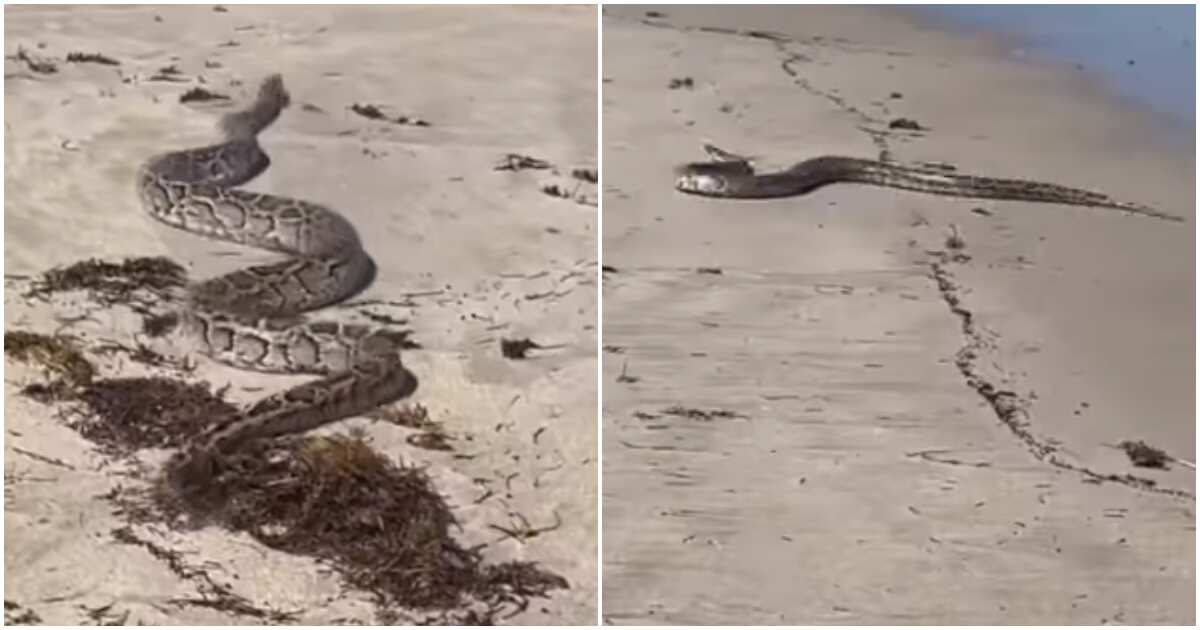 A video of a massive snake slithering in the sunny weather around a beach in Florida in the United States of America has surfaced on social media.

In an Instagram video released by Only in Dade, chanced on by YEN.com.gh, the massive reptile crawling along the shorelines.

It slithered in the sands before someone eventually snatched it up.

Several people who have seen the clip shared their views on it. YEN.com.gh compiled some of the comments below:

King Joefro: Video of GH man acting like a mad man as he spills facts about Vitamin C causes Stir

”There are snakes all over Miami, especially in the clubs.”

”Thanks for picking up my ex .”

”Kevin Durant enjoying his offseason, let him be.”

”Poor little noodle just wanted to go for a swim. I’m glad it was caught tho.”

”Watch for sharks, snakes, alligators, club promoters, strippers, Herbalife. At this point, we are worse than Australia on the danger scale!”

Watch the video below:

Still on snakes, YEN.com.gh previously reported that a video of a massive snake crossing the street late in the night has surfaced on social media and caused several members of the cyber community to panic.

In the short video clip making the rounds on social media, chanced on by YEN.com.gh, the long, massive, and limbless reptile crossing from one side of the road to the other.

Rupin1992, a Twitter user, shared the video on his page on March 8, which has now gained traction online.

Also, YEN.com.gh reported that a video of a man helping save a deer has left South African online users divided on whether it was the right thing to do or not.

The video, shared by Russ Sydenham on Facebook, shows a large snake constricting a deer in the middle of the road.

A branch hitting the conjoined animals can be seen in the clip, to which the snake snaps and slithers away, letting go of the small buck. It proceeds to run away before the video ends.