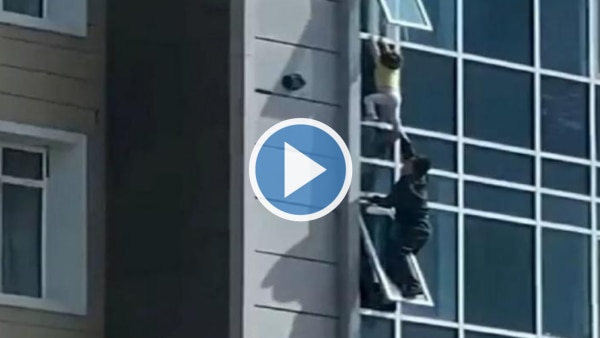 Viral Video: A brave man is being appreciated widely on social media after he climbed on a tower to save a child hanging from the 8th floor in Kazakhstan. In a video of the daring rescue that has gone viral, the man can be risking his own life as he scaled the building to save the child from falling. The video was captured by passersby and has gone viral. The incident happened when the 3-year-old child used cushions and toys to climb out of the window, while her mother had gone shopping.Also Read – Viral Video: Horse Gets Scared of Cracker, Runs Away With Groom Sitting On Top. Watch

Good News Movement posted the video and explained how the man was strolling with his friend when he noticed the toddler. Without giving it a second thought, he sprang into action to save the life of the little one.

“Sabit Shontakbaev was walking with a friend yesterday to work when he saw a dangling toddler holding on for her life from a window on the 8th floor of a building. Immediately Sabit rushed into the building and ran up, getting access to the apartment below. He then made his way to the window,” the caption reads.

“Sabit said: ‘I did not have a safety harness so my friend held my legs. At that moment I didn’t think about anything, I just wanted to help the child.’

Sabit, who has three daughters and a son, was awarded a medal by the city’s deputy emergency minister.  He was also awarded a three-bedroom apartment and a TV.

The post further reads, ”Sabit insists he is not a hero and humbly left the scene as he was late to work. Sabit who has 4 kids of his own was awarded a medal by the city’s deputy emergency minister. Local media reported that he was also awarded a 3-bedroom apartment & tv. Turns out he had been living alone, working in Nur-Sultan to send money home to his family – who were in Kyzlorda. The new apartment means his family, which includes his three daughters and a son, can join him in the city. You’re a true hero, Sabit!”

The video has gone viral, and people heaped praises on the good Samaritan. ”My heart almost stopped watching this. This man was on the right place at the right time. Glad to hear he was well compensated. This child was born again,” wrote one user. Another wrote, ”Glad the universe looked out for him after all that.” A third wrote, ”He was risking his own life to save the little one!! We have angels on earth!”