'We need these': Internet divided after post office declares it will CHARGE $12 from 'rude' customers – MEAWW - News Tech Reviews Skip to content 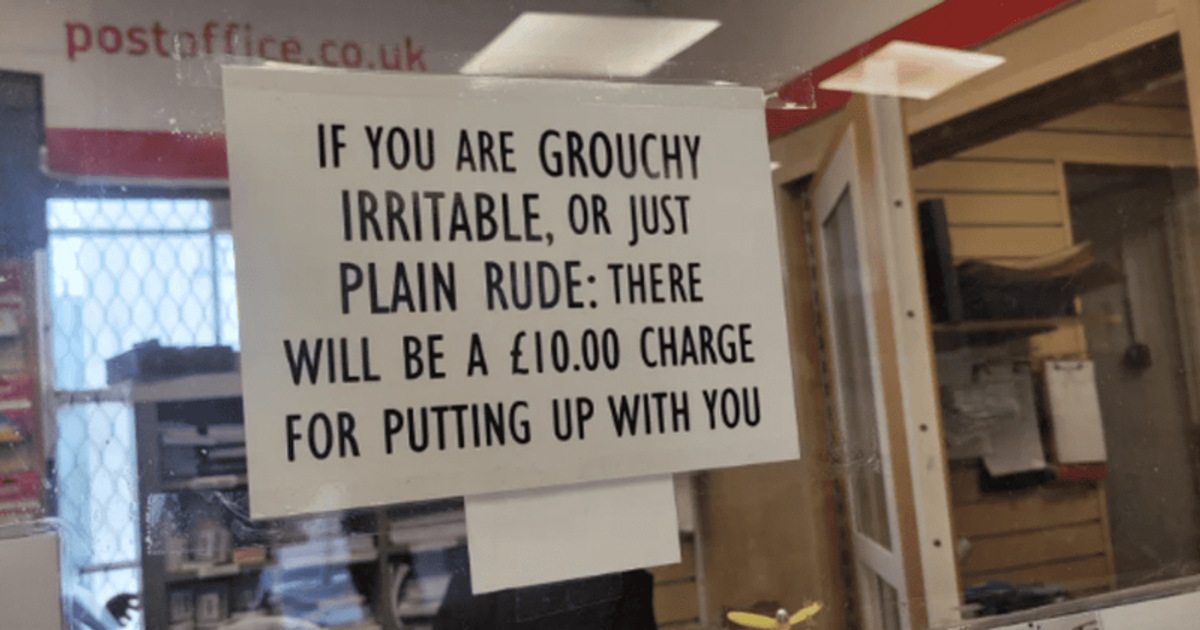 WALES, UNITED KINGDOM: Working in public jobs requires taking verbal hits from customers who are sometimes not so polite. It is a part and parcel of the working lifestyle. However, one post office in Wales, United Kingdom, has had enough, and its workers are now adopting a new approach.

A Reddit user shared a picture of a notice placed at their local post office that has now gone viral. The sign reads, ‘If you are grouchy or irritable, or just plain rude: there will be a £10 ($12.14) charge for putting up with you.”

Who was Rob Brown? Family pays homage to mountaineer, 33, who died in climbing accident

The Reddit user, who goes by the name u/Zer0daveexpl0it, wrote, “My local Post Office has had enough of your s**t.” The user suggested it was a try “at good old British humor.” He added, “I can see Basil Fawlty having a sign like this. Either way, I didn’t test the fellow and was done and dusted in less than two minutes.”

The word Swyddfa’r, which means post office in Welsh, can be seen in the background of the photo. But it is still not clear exactly where in Wales the picture was clicked. The viral post has almost 4K votes and more than 100 comments

The image quickly escalated into a debate within Reddit’s comment section.
While many appreciated the approach of the post office, others didn’t like the idea of being punished for being in a bad mood.

One user hoped the sign would help people “realize that being abusive to staff isn’t a way to get ahead in life.” One user added, “I need this where I work. We’d made a fortune!”

Another comment read, “I vibe with that – as unenforceable as it may be.” One person wrote, “We need these in more stores. You don’t need to be excited/happy while there. Just don’t be rude to workers.”

However, some were not happy with the fine as one user wrote, “I hope this sign is double-sided.” Another chimed in, “So if my mum dies and I’m in mourning thus feeling a little ‘grouchy’, but need to send a parcel, I’m going to be charged £10? Moronic.”

‘Bit of fun with customers’

A spokesperson for the post office told Metro.co.uk, “We’ve spoken to the Postmaster who tells us they put up the sign as a bit of fun with their customers and have since taken down the sign.”

They added that the couple, who authorized the branch, “are very community-minded and popular with their customers, many of whom have seen the funny side.”

This article contains remarks made on the Internet by individual people and organizations. MEAWW cannot confirm them independently and does not support claims or opinions being made online.